Place, Alterity, and Narration in a Taiwanese Catholic Village by Marco Lazzarotti is the 13th book in our Palgrave Macmillan book series, Asian Christianity in the Diaspora.

Please check out all our books in our series.

This book introduces a simple idea: when we tell a story, we tell a story and at the same time create the world where this story takes place. Narration creates environments, spaces and, in a certain sense, gives symbolic meanings and values to the identities by which people interact in their daily experiences. Set in the multicultural and multireligious Taiwanese environment, this book describes the interactions, and above all the narrations, linked to a Catholic village located in the Taiwanese countryside. Catholicism in Taiwan is a minor religion (around 2% of the population), and considered a foreign and heterodox religion, something different and “other” from the Taiwanese mainstream religious environment. It is this sense of alterity that creates the stories about this place and, as a consequence, creates this place and its special identity.

Asian Christianity in the Diaspora

The series aims to provide Asian American theological responses to the complex process of migration and resettlement process of Asian immigrants and refugees. We will address theoretical works on the meaning of diaspora, exile, and social memory, and the foundational works concerning the ways in which displaced communities remember and narrate their experiences. Such an interdisciplinary approach entails intersectional analysis between Asian American contextual theology and one other factor; be it sexuality, gender, race/ethnicity, and/or cultural studies. This series also addresses Christianity from Asian perspectives. We welcome manuscripts that examine the identity and internal coherence of the Christian faith in its encounters with different Asian cultures, with Asian people, the majority of whom are poor, and with non-Christian religions that predominate the landscape of the Asian continent. Palgrave is embarking on a transformation of discourse within Asian and Asian American theological scholarship as this will be the first of its kind. As we live in a global world in which Christianity has re-centered itself in the Global South and among the racialized minorities in the United States, it behooves us to listen to the rich, diverse and engaging voices of Asian and Asian American theologians.

Below are the list of 12 other books in our series with more books to be released later in the year. 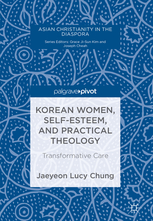 Sixth Book in the Series:  The Gendered Politics of the Korean Protestant Right: Hegemonic Masculinity by Nami Kim

Second Book in the Series: Identity, Youth, and Gender in Korean American Church by Christine Hong

As we listen to Psy’s music are we laughing at him or with him? This book responds to this question from historical and theological perspectives and tackles the pressing issues …

It was a joy to be part of this #HealingOurBrokenHumanity book discussion for CBF. Our book is the CBF Book Club reading for July. (Click link in bio to watch our discussion).