SEEING GOD FACE TO FACE — SERMON FOR PENTECOST 9A (GENESIS 32) 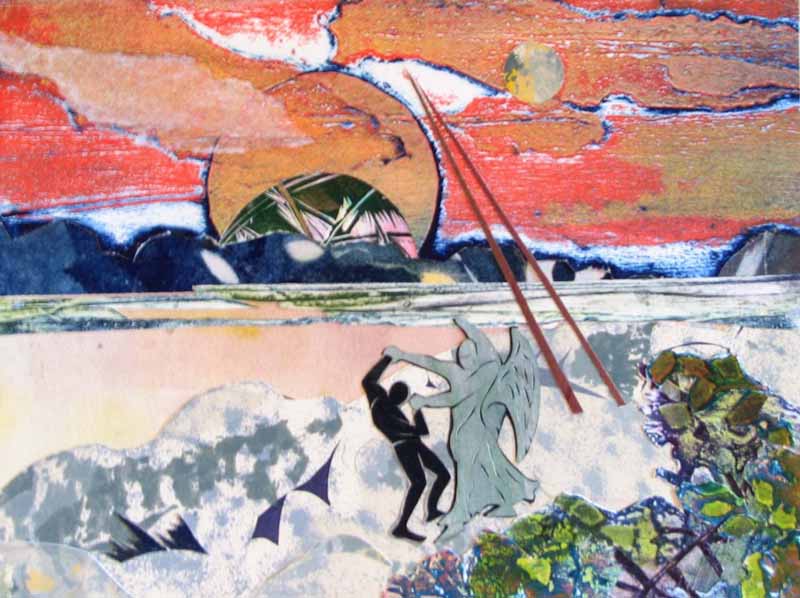 It’s said that no one can see the face of God and live (Ex 33:20) but there are exceptions to the rule. One of those exceptions involves Jacob, who saw the face of God but not until he participated in a wrestling match that lasted almost to daybreak.

We catch up with Jacob, the son of Isaac, and grandson of Abraham as he prepares to cross the Jabbok to meet up with his estranged brother Esau. Jacob is an intriguing character. In fact, he’s something of a trickster. It all started in the womb when Jacob grabbed Esau’s heel so that he could emerge from the womb first. His parents named him Jacob, which can be translated as “He who grabs the heel” (Gen. 25:26). That name is related to the Hebrew word that means “twisted” or “deceitful.”  Then Jacob defrauded Esau out of his birthright with a pot of stew.

Now, as this trickster camps at the Jabbok, his past is catching up with him. He wants to return to his homeland, but that means facing his estranged brother. Because he doesn’t know if Esau still wants to kill him, Jacob sends a peace offering to his brother. He also sends his family across the river to see what Esau will do. While he sits alone by the campfire, thinking about the future, a man attacks him from out of nowhere. Jacob fights back, and as the wrestling match ensues, we learn that this “man” is really God.

When the sun is about to rise, Jacob’s adversary tries to get the upper hand by knocking his hip out of its socket. Despite his wound, Jacob won’t let go, at least not until he receives a blessing. That blessing comes in the form of a name change. From now on, Jacob will be known as “Israel” because he has “striven with God and with humans, and [has] prevailed.” As the sun rises, Jacob gives this place along the Jabbok a name. He calls the place Peniel because he saw God “face to face and yet [his] life is preserved.”

This story reveals a deeply troubled man who seems to be wrestling with anxiety and uncertainty. So, who is he wrestling with? Is it himself? Is it God? Or is it both? Grace Ji-Sun Kim writes that Jacob “did not give in to despair and fear. He hung on, but Jacob does not walk away unchanged; he has a new name and he limps into the future, scarred by the struggle.” It’s in this struggle that  “Jacob the oppressor is redeemed.” So, as Grace writes: “if God can use Jacob to build a nation, then we also have reason to hope that God will redeem and use us in spite of our greedy, exploitive, and self-centered behavior.” Now, “this will not happen without a struggle, but genuine change is possible.” [Preaching God’s Transforming Justice, p. 340]. That is good news!

I was looking up a reference in one of Jürgen Moltmann’s books when I noticed that he opened the book with a meditation based on this story that describes his conversion and call to ministry. If you don’t know the name, that’s okay, but Moltmann served in the German army during World War II and was captured. He was sent to a series of prisoner of war camps. That’s where he came to faith. In his meditation, he tells us about the “hopeless misery of a prisoner of war’s existence.” This misery caused the prisoners to wrestle with God “in order to survive the abysses of senselessness and guilt.” He writes that they “emerged from those years ‘limping’ indeed, but blessed.” [Source of Life, p. 1]. It was during these wrestling matches with God that they faced the truth of the atrocities perpetrated by their homeland. That included the Shoah or Holocaust. Nevertheless, what “looked like a grim fate when it began turned into an undeserved, rich blessing.”  He confesses that “we came with wounded souls, and when we left ‘my soul was healed’” [Source of Life, p. 8].

Our wrestling matches with God and ourselves might not be quite as dramatic as Jacob’s or Jürgen Moltmann’s, but we too experience life-changing wrestling matches. When God initiates one of these matches, God wants us to join in the match. God welcomes our questions and our concerns. God will push us, but if we stay in the game our lives will be changed for the better.

It’s in this moment of reckoning that we see God face to face. If we turn the page to chapter 33 of Genesis, we will cross the river with Jacob. We’ll get to watch his reunion with Esau. We’ll see Esau running to embrace his estranged brother, and when Jacob offers a peace offering in return Esau tells him that the gift wasn’t necessary. Jacob responds to his brother’s graciousness and forgiveness by telling him to keep the gifts, because “to see your face is like seeing the face of God—since you have received me with such favor” (Gen. 33:9-10).

It was a joy to preach and serve communion on #WorldCommunionSunday!