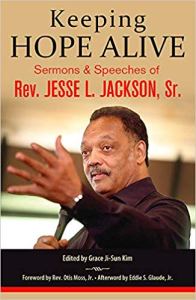 So glad to see Keeping Hope Alive being featured by Orbis Books in their January Newsletter.

I hope you can all get a copy of my new edited for yourself, school and church library. it is an important living legacy document for many generations to read. 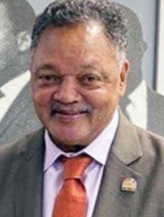 The Reverend Jesse Louis Jackson, Sr., founder and president of the Rainbow PUSH Coalition, is one of America’s foremost civil rights, religious and political figures. Over the past forty years, he has played a pivotal role in virtually every movement for empowerment, peace, civil rights, gender equality, and economic and social justice. On August 9, 2000, President Bill Clinton awarded Reverend Jackson the Presidential Medal of Freedom, the nation’s highest civilian honor.

Born on October 8, 1941 in Greenville, South Carolina, Jesse Jackson graduated from the public schools in Greenville and then enrolled in the University of Illinois on a football scholarship. He later transferred to North Carolina A&T State University and graduated in 1964. He began his theological studies at Chicago Theological Seminary but deferred his studies when he began working full-time in the Civil Rights Movement with Dr. Martin Luther King, Jr. He was ordained on June 30, 1968 by Rev. Clay Evans and received his earned Master of Divinity degree from Chicago Theological Seminary in 2000.

It was so life giving to have Korean food with my friends!!