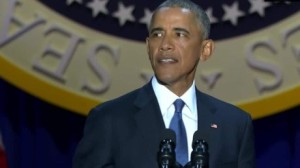 President Obama’s farewell speech left me with mixed emotions. I have heard opinions from some that believe that his presidency was a time where a new and threatening wave of racism and prejudice not seen before, came into fruition. It was a time where the transparency of social media illuminated hatred and crime from those who are supposed to protect us. In light of this, many view his presidency as a success. He did what no one believed could be done. He became the first black president of the United States and, over two terms, was credited with an economic recovery from ‘the great recession’. But was it as successful as it appeared to be in his farewell speech to the crowd in Chicago?

Saying what you hope to do, your wants, dreams, and aspirations – is not difficult. It is easy to preach to an audience of your supporters and admirers. But following through on promises of change is indeed a much bigger challenge. Everything Barack Obama said was cheered and applauded by 18 000 supporters in his adopted hometown, Chicago. Many people are enamored with Obama, and there are reasons for their love. He loves his family, he never expressed views out of prejudice, he fought for a public health care system, and most importantly, he isn’t Trump. But I wonder, alongside many others, on whether he will be remembered as a good president.

He ran his candidacy on the primary hope for change from the previous eight years. It is impossible to forget the iconic Shepard Fairey “Hope” poster which came to present Obama’s 2008 presidential bid. We can remember the moving speeches he made, expressing his positivity about the future, boosting the morale of all those watching. But did Obama really make good on the hope that he frequently mentioned, even in his farewell speech when he proclaimed, “yes we did, and yes we can.”

Obama won the Nobel Peace Prize in 2009. He was surprised and humbled by the award. The Noble Peace Prize committee gave him this accolade to assert their hopes that he would live up to his campaign rhetoric and impassioned speeches. While the country saw him time after time complying with the right and compromising his promises, it became evident that maybe the big change we hoped for wouldn’t come as expected.

According to recent figures, the United States dropped about three bombs every hour, 24 hours a day. That is a total of 26171 bombs in 2016. While there may be many complexities that I am not informed with to justify this violence, it surely does not reflect well on the Nobel Peace Prize recipient. Medea Benjamin writes, “While candidate Obama came to office pledging to end George W. Bush’s wars, he leaves office having been at war longer than any president in US history. He is also the only president to serve two complete terms with the nation at war.”

We liberals are quick to criticize conservatives. We say that they are racist, homophobic, sexist and only fight for the top 1%. But can we say we are any better? Many of us stayed quiet as Obama, the “Deporter in Chief” introduced re-packaged and slightly more centered policies and bills from the previous Bush administration. Between 2009 and 2015, Obama’s administration has removed more than 2.5 million people through immigration orders.

We have become complacent during Obama’s presidency as we felt just as comfortable as him, to remain with the status quo rather than challenging it and doing what Christians are called to be. We are called to the ‘salt and the light of the world’, but we have remained silent as Obama continued to drop bombs, did not try to stop the gun violence and deported migrants out of the United States. We do recognize the obstructionism and the racism that President Obama endured from the moment he was elected. That made it difficult for him to carry forward policies. However, did he live up to his campaign of hope?

Now as we enter the Trump administration, many are left angry and baffled by what seemed to be a quick publicity stunt that developed into a shocking election for presidency. We are left to do what we can; protesting, rallying and sharing petitions. We are motivated to do something about Trump’s attitude towards women and women’s rights. We are holding the Women’s March on Washington on January 21, 2017 where over 600 000 are expected to march to protect their rights, safety, health and families. These marches are happening all over the United States and worldwide. It is quickly becoming a world-wide movement.

Christian theologians have started a petition against the nomination of Jeff Sessions and ministers led by Rev. Barber continues to hold Moral Monday protests now with a focus on Trump’s presidency.

Few liberals will stand by Trump as he talks about inhibiting immigration based on race, building walls, and punishing women who have abortions. We have been newly energized to organize and protest against the inexcusable sexism, racism, xenophobia and homophobia that Trump has expressed in his public and private statements.

Jesus says, “Blessed are the peacemakers for they shall inherit the Kingdom of God.” As I look back on the Obama’s presidency, I wish the left and I would have protested and spoke out more against the drones, militarization, capitalism, and neo-liberalism that transpired in the past eight years. It leaves me with bitter tasting regret that the man who shattered so many walls of historic racism in the political landscape also submitted to those who try and perpetuate inequality. If he had to upset fellow politicians for the greater good of the country then perhaps we could have had something to applaud and celebrate. Maybe then we could all have said with greater conviction, “yes we can, and yes we did”.

Grace Ji-Sun Kim is an Associate Professor of Theology at Earlham School of Religion. She is the author of Embracing the Other;Making Peace with the Earth;Here I Am;Christian Doctrines for Global Gender Justiceco-edited with Jenny Daggers;Theological Reflections on “Gangnam Style”co-written with Joseph Cheah;Reimagining with Christian Doctrinesco-edited with Jenny Daggers;Contemplations from the Heart;Colonialism, Han and the Transformative Spirit;The Holy Spirit, Chi, and the Other; and The Grace of Sophia. She is a co-editor with Dr. Joseph Cheah for the Palgrave Macmillan Book Series, “Asian Christianity in Diaspora”.