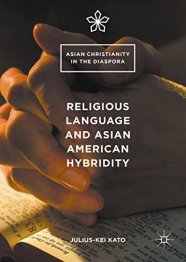 Dr. Kato‘s new book is an important read about how the term “hybridity” is becoming an increasingly important concept within postcolonialism and Christianity. Read the book to find out.

In this book, Julius-Kei Kato lets the theories and experiences of Asian American hybridity converse with and bear upon some aspects of Christian biblical and theological language. Hybridity has become a key feature of today’s globalized world and is, of course, a key concept in postcolonial thought. However, despite its crucial importance, hybridity is rarely used as a paradigm through which to analyze and evaluate the influential concepts and teachings that make up religious language. This book fills a lacuna by discussing what the concept of hybridity challenges and resists, what over-simplifications it has the power to complicate, and what forgotten or overlooked strands in religious tradition it endeavors to recover and reemphasize. Shifting seamlessly between biblical, theological, and modern, real-world case studies, Kato shows how hybridity permeates and can illuminate religious phenomena as lived and believed. The ultimate goal of the move toward an embrace of hybridity is a further dissolution of the thick wall separating ideas of “us” and “them.” In this book, Kato suggests the possibility of a world in which what one typically considers the “other” is increasingly recognized within oneself.

“For Julius-Kei Kato, hybridity is a term for his multiple identities, a conceptual tool for doing theology, a hermeneutical lens for reading biblical and theological texts, and a paradigm for religion.While this book definitely makes a valuable contribution to the construction of Asian North American theology and hermeneutics, it is more than an Asian American theology of hybrid. Kato’s integrity and generous spirit, as a hybrid and interdisciplinary scholar, invites anyone who is interested in religion or religious language to a new way of being religious in this globalized and pluralistic world.” (Jin Young Choi, Assistant Professor of New Testament and Christian Origins, Colgate Rochester Crozer Divinity School, USA)

“Hybridity can have such profound influence on and implications for how we view ourselves, others, biblical texts, and the world around us. Kato’s work opens up new lenses for speaking of religious language and identity using the rich concept of hybridity. I encourage anyone who is interested in thinking about multiculturalism, diaspora, Asian North America, and religious language and context to read it.” (Chloe Sun, Associate Professor of Old Testament, Logos Evangelical Seminary, USA)

“This is a quite substantial and significant contribution to global theological and critical thinking. Starting from the view that the world today is profoundly and inescapably hybrid, Julius-Kei Kato calls for conversation across worlds, with a focus on religious-theological language and with the aim of breaking down walls. In this volume he pursues such a conversation from the perspective of his own experience of hybridity as a North American Asian, engaging both theological tradition and biblical texts in the process. The result is a timely and masterful example of and model for constructive critical engagement.” (Fernando F. Segovia, Oberlin Graduate Professor of New Testament and Early Christianity, The Divinity School, Vanderbilt University, USA)

“In this book Kei Kato untangles the often misunderstood term ‘hybridity’ within the lived experiences of Asian American communities. While he admits his ‘confessional’ stance on this term, he draws readers to the pain and promise of the multiple worlds in which we find ourselves today.” (Fumitaka Matsuoka, Pacifica School of Religion, Berkeley, USA)

“This volume is a strong step forward in our current theological world. Kei Kato thinks outside the Euro-American box. He is a marvelous Asian scholar who presents the beauty and the integrity of religious language in today’s Asian American hybridity. The very title of his book includes the phrase Asia-American Hybridity, which honors not just the meaning of some reality in two languages but also the diverse beauty of what we see, know, and touch.” (Kenan B. Osborne, OFM, Professor Emeritus, The Graduate Theological Union, Berkeley, USA)

“Kato invites all of us who are part of a globalized, hybridized world for a hopeful conversation on how hybridity can serve as a hermeneutical key to better understand the contemporary North American context as well as  ancient texts of the Christian tradition. I highly recommend this book.” (Uriah Y. Kim, Academic Dean and Professor of Hebrew Bible, Hartford Seminary, USA)

“With Religious Language and Asian American Hybridity, Julius-Kei Kato makes an important contribution to contextual biblical interpretation and Christian theological discourse.  Drawing on the hybrid and multiple diasporic experiences of himself and others, Kato makes the theoretical foundation of his approach accessible and applicable to diverse readers, inviting them to reflect on their own hybridity.  Kato puts his ‘hybrid reader’ ‘in conversation’ with classic theological concepts and biblical passages both to critique the destructive use of religion to create divisions among people and to appropriate the constructive theological potential to promote reconciliation and justice.” (Henry W. Morisada Rietz, Professor of Religious Studies, Grinnell College, USA)

“Perhaps no one is more qualified than Julius-Kei Kato to write on how diaspora and hybridity impact the development of Asian-American theology. Himself a son of Filipino-Japanese parents, theologically trained in Asia, Europe, and the US, and having taught in Canada and many other countries, Kato has experienced hybridity and diaspora first-hand and has written extensively on these themes. He has distilled both his rich experience and deep scholarship into this highly readable volume. I most strongly recommend it for classroom use and personal reading.” (Peter C. Phan, The Ignacio Ellacuria, S.J. Chair of Catholic Social Thought, Georgetown University, USA)

Other Books in the Series, Asian Christianity in the Diaspora

EVANGELICAL PILGRIMS FROM THE EAST

THE GENDERED POLITICS OF THE KOREAN PROTESTANT RIGHT

IDENTITY, YOUTH, AND GENDER IN THE KOREAN AMERICAN CHURCH

This book studies Korean American girls between thirteen and nineteen and their formation with regard to self, gender, and God in the context of Korean American protestant …

As we listen to Psy’s music are we laughing at him or with him? This book responds to this question from historical and theological perspectives and tackles the pressing issues …

This book explores the ways through which Korean American men demonstrate and navigate their manhood within a US context that has historically sorted them into several limiting, …

This book gathers the voices of four local Hong Kong theologians to reflect on the 2014 democracy protests in the city from the perspectives of Catholic social teaching, …

Asian American theology is still at its nascent stage. It began in the 1980’s with just a handful of scholars who were recent immigrants to the United States. Now with the rise in Asian American population and the rise of Asian American theologians, this new community is an ever-important voice within theological discourse and Asian American cultural studies. This new series seeks to bring to the forefront some of the important, provocative new voices within Asian American Theology. The series aims to provide Asian American theological responses to the complex process of migration and resettlement process of Asian immigrants and refugees. We will address theoretical works on the meaning of diaspora, exile, and social memory, and the foundational works concerning the ways in which displaced communities remember and narrate their experiences. Such an interdisciplinary approach entails intersectional analysis between Asian American contextual theology and one other factor; be it sexuality, gender, race/ethnicity, and/or cultural studies. This series also addresses Christianity from Asian perspectives. We welcome manuscripts that examine the identity and internal coherence of the Christian faith in its encounters with different Asian cultures, with Asian people, the majority of whom are poor, and with non-Christian religions that predominate the landscape of the Asian continent. Palgrave is embarking on a transformation of discourse within Asian and Asian American theological scholarship as this will be the first of its kind. As we live in a global world in which Christianity has re-centered itself in the Global South and among the racialized minorities in the United States, it behooves us to listen to the rich, diverse and engaging voices of Asian and Asian American theologians.

I love spending time with my beautiful daughter ❤️