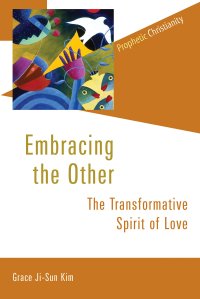 Read this very interesting book review by April Yamasaki of my latest book, Embracing the Other.  It was published by The Christian Century on May 16, 2016.

Below is an excerpt of the review. for the full review please read it on The Christian Century website.

A review of Grace Ji-Sun Kim

Embracing the Other is the newest volume in the Prophetic Christian­ity series, in which “authors navigate difference and dialogue constructively about divisive and urgent issues of the early twenty-first century.” For Grace Ji-Sun Kim, the pressing issue is how we might move beyond racism and sexism and toward justice and reconciliation for everyone regardless of race or gender.

To address this issue, Kim brings together a number of strands: an examination of the “foreign women” of the Hebrew Bible; the history and experience of Asian immigrant women in North America as “foreign women”; insights from feminist, postcolonial, and Asian-American studies; and Kim’s own experiences as an Asian-American woman who teaches theology at Earl­ham School of Religion.

Kim examines Ezra 9, where officials among the returned exiles report that some of their men have begun intermarrying with “foreign women” from the neighboring lands, contrary to God’s commands. Distressed by this news, Ezra tears at his hair and clothing, spends time in fasting and prayer, and then insists that such intermarrying must stop. What’s more, the foreign women end up paying the harshest penalty as the men in power decide that the women and their children are to be expelled from the community.

Just as these foreign women were marginalized and expelled from their adopted community, many Korean women who are immigrants to the United States struggle with marginalization and alienation. Kim is careful to acknowledge the diversity of women’s experiences and the diversity of those commonly grouped together as Asian American. At the same time, she ably addresses their common context, which includes the racialization of Asian Americans, the sense of hybridity between two cultures, the myth of the model minority, and the ongoing challenge of being identified as a perpetual foreigner.

[to read the rest of the book review, please click here]

April Yamasaki ~ Pastor of a vibrant multiethnic church, author of Sacred Pauses: Spiritual Practices for Personal Renewal and Spark: Igniting your God-Given Creativity, blogging on writing and other acts of faith.

It was so life giving to have Korean food with my friends!!