I attended COP21 in Paris with the World Council of Churches and Sojourners.
It was an exciting COP meeting for so many reasons.  Read my latest Sojourner’s Magazine (March 2016) and find out why.
Below is a repost of just the beginning of the article. For the full article, please subscribe to Sojourners. 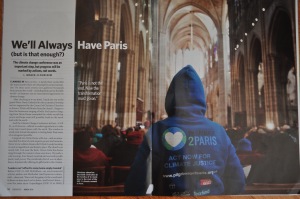 I LANDED IN Paris on Dec. 3, barely three weeks after the mass murder there of 128 people by armed extremists. On these same streets now gathered thousands from around the world—including from across the faith world—to hammer out an international agreement on climate change.

After checking in to my hotel, I made my way to the grand Notre Dame Cathedral for the ecumenical worship service organized by the Council of Christian Churches in France. While still blocks from the church, I began to hear the boisterous ringing of bells. Such joyous clanging from Notre Dame reminded the whole world that peace and hope were still possible, both on the earth and with the earth.

And the Climate Change Conference in Paris—COP 21, as it’s known—offered a needed opportunity to take a key step toward peace with the earth. The window to avoid total climate disruption is closing faster than many of us imagined possible.

I stepped into Notre Dame with awe—and an awareness that this kind of work requires prayer and miracles. Never in my wildest dreams did I think I would worship in such a magnificent and historic place. The church was nearly full. I sat near the back. Voices from the choirs rang through the massive stone sanctuary. On such a cold evening, their beauty touched and warmed us with poetry and power. The worldwide church was in attendance, dramatically offering its gifts back to the Creator.

Before COP 21, Bill McKibben—an environmental activist, author, and Methodist (and Sojourners columnist)—observed, “Paris isn’t the game, it’s the scoreboard. It shows us how much we’ve done—and haven’t done—over the years since Copenhagen (COP 15 in 2009), when we suffered a huge defeat. There is a big enough movement now—in no small part thanks to faith communities, patriarchs, popes, and the like—that we’ll see some progress in Paris. World leaders can’t afford to come home empty-handed.”

He was right. People of faith came to Paris from every corner of the earth. Some came as negotiators and political delegates, some as observers, and others as prophetic voices to hold political leaders accountable to the science and the moral imperative of safeguarding a living planet.

As a consequence of the November terrorist attacks, public marches for climate justice—which had been expected to draw more than 200,000 people—were cancelled by French authorities. In lieu of the marches, French activists called for a “global march” in solidarity with them. At the end of November, hundreds of thousands around the world took to the streets to make clear to the leaders headed to Paris that the whole world was watching. More than 570,000 people marched in 2,300 events in 175 countries, according to organizers, making it the biggest set of global climate change marches in history. “The charge from the streets for leaders to act on climate has been deafening, with record numbers turning out across the world,” said Emma Ruby-Sachs, campaign director for Avaaz, a global civic movement.

*for the rest of the article, please login into Sojourners or buy the March Issue 2016.

– See more at: Sojo Magazine
Read my other posts about #COP21

Grace Ji-Sun Kim is an Associate Professor of Theology at Earlham School of Religion. She is the author of  Embracing the Other; Here I Am; Christian Doctrines for Global Gender Justiceco-edited with Jenny Daggers; Theological Reflections on “Gangnam Style” co-written with Joseph Cheah;Reimagining with Christian Doctrinesco-edited with Jenny Daggers;Contemplations from the Heart;Colonialism, Han and the Transformative Spirit;The Holy Spirit, Chi, and the Other; and The Grace of Sophia. She is a co-editor with Dr. Joseph Cheah for the Palgrave Macmillan Book Series, “Asian Christianity in Diaspora”.

My forthcoming book #Invisible will be released Nov 9. Please preorder your copy today wherever books are sold.