Embracing the Other, Here I Am, Judson Press, Love in a Dangerous Time, Paris, podcast 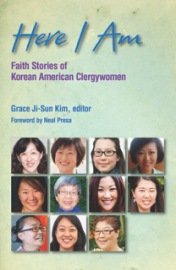 I was interviewed on Love In a Dangerous Time podcast about my new edited book, HERE I AM: Faith Stories of Korean American Clergywomen – Rev. Dr. Grace Ji-Sun Kim.

My first interview on Love In a Dangerous Time was on my other recent book, Embracing the Other.

Please check the website for many more interesting interviews.

Below is description of the interview from Love In a Dangerous Time website.

You may have noticed that it’s been more than a week since our last episode. There are lots of reasons why this happened, but I’ve been thinking about what is the best weekly schedule for this podcast. I’ve been trying to get the shows up and running on Wednesday mornings, but more than once it’s proven to be either really difficult or even impossible. It’s hard to integrate a weekly rhythm into my schedule, but I do think that Monday is a much better day. You know, it’ll give me the weekend to get it all together. So henceforth, you’ll be getting your dose of love on Mondays.

As I write, it’s about two weeks since the tragic and appalling attacks in Paris. They are still very much on everyone’s mind. The attacks even come up in the interview that follows here. I don’t have a special program in response to that unholy brew of religion and nationalism, but such programs in the near future. I really think that we have to get serious and figure out how we, people of faith, can play a role to change our world to the point where things like that are unimaginable. So I will be bringing on guest to talk about this whole area, perhaps in the Open Ended Conversations series.

But today, my guest is, for the second time, Dr. Grace Ji-Sun Kim. We did an interview just a few weeks ago on her recent book, “Embracing the Other,” which discusses racism and prejudice in the Church (Episode 40).

It’s really an interesting book and our conversation goes from the difficulties faced by Korean women who want to work within the church, the history of the Korean Church, its role today, and some of the outstanding work being done by Korean women clergy.

If you want to add any thoughts, or question anything we talk about, please leave a comment either on the webpage for this episode at www.loveInADangerousTime.net. If you want to say it, rather than type it, just click on the little microphone on the right side of the page and leave a voice recording. I’d love to hear from you.