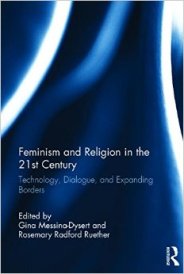 Gina Messina-Dysert is an author, activist, blogger, dean and a wonderful friend. Congratulations on editing such a timely book!

This anthology of brand new essays will explore the new directions of conversations occurring in relation to feminism and religion, as well as the technological modes being utilized to continue dialogue, expand borders, and create new frontiers in feminism. It is a cross generational project bringing together the voices of foremothers with those of the twenty-first century generation of feminist scholars to discuss the changing direction of feminism and religion, new methods of dialogue, and the benefits for society overall.

“This is an exciting collection of essays from some of the best feminist voices in religion of our current era. The writers explore the profound effects that technology has on how we communicate and the myriad ways we do so globally as well as locally to probe enduring social inequalities, reshape religious conversations, inspire social justice activism, expand our sense of religious communities, breaking down restrictions of language and space, transform education, find ancestors, and explore embodiment. Rather than see us as captive to technologies’ expansions, these writers point us toward the possibilities of technologies’ positive transformations as tools of justice-making and sustaining.”

“For anyone interested in how feminism and religion intersect with blogging, open source, life broadcast, social media, virtual community, and activism in cyberspace, this text is a must-read. Feminist scholars and activists need to catch up with cyberfeminism or become obsolete!”

“Drawing on diverse methods and theories, the contributors to Feminism and Religion in the Twenty-First Century explore how online forms of communication and community are—and aren’t—challenging exclusionary, authoritarian, and patriarchal religious institutions and ideas.”

“This fascinating collection of essays by diverse authors explores a multitude of possibilities for women’s use of social media in religious reflection, community building, and activism. The essays are informed by both theory and practice and engage a range of religious traditions, settings, and topics to enhance our understanding of contemporary feminism and religion.”

“This collection of provocative essays on feminist theology speaks to our world that is increasingly immersed in technology as a way of living. The book stands at the intersection of feminist theology and feminism lived out pedagogically to illuminate an emerging, creative, cutting edge way of being woman. The reflections span issues of social media, alternative communities, and technology. These essays provide delightful views of new and burgeoning areas of reflection and practice on what it means to do theology for women in our world today, with blogging, hashtags, and social networking.”

Blogging as religious feminist activism: Ministry to, through, with and from; Monica A. Coleman with C. Yvonne Augustine

Being Undone by the Other: Feminisms, Blogs, and Critique; Xochitl Alvizo

From Telephone to Live Broadcast: Becoming a Brick-and-Mortar Synagogue Without Walls; Bracha Yael

Experimenting with Feminist Pedagogy and Technology in the Classroom; Grace Y. Kao

Gina Messina-Dysert, Ph.D. is Dean of the School of Graduate and Professional Studies at Ursuline College and Co-founder of Feminism and Religion.

1 thought on “Feminism and Religion in the 21st Century: Technology, Dialogue, and Expanding Borders”