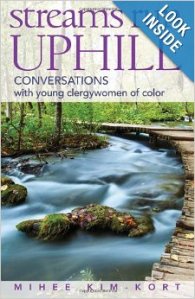 We need more Asian American writers, especially Asian American women writers.  i am happy to announce that Rev. Mihee Kim-Kort has just published her second book, Streams Run Uphill.  I had the privilege of writing the Foreword to her first book, Making Paper Cranes.  Congratulations Rev. Kim-Kort on your second book.

Coined by our mujerista theologians it literally means, “life is struggle,” or even more simply “to live is to struggle.” Conversely, the flip is true, too – to struggle is to live. The book Streams Run Uphill: Conversations with Young Clergywomen of Color was first inspired by an African proverb that echoes the sentiment above.

Where streams run uphill, there a woman rules.

The original subtitle was “The Pastoral Identity and Ministry of the Other Clergywomen.” The word other is significant. It conjures up orientalism, exoticism, colonialism, and those felt effects still present today even in the more liberal disciplines and vocations. The history of feminism especially in North America has mostly been narrow and excluded women of color until fairly recently. But, this isn’t unusual. Much of majority culture has often marginalized groups based on gender, race, economics, orientation, and ability. Still, especially in the church, there continues to be an urgency in working towards reconciliation at all levels, and at the vey least it means making sure there is a space for all voices and experiences.

From the Prologue: It is the dynamic but unexpected harmony of streams that “run uphill” that compels me the most. There is struggle in an uphill endeavor, but miracle in its very existence. There is an irrationality about it, as well as a subversive, kingdom-shaking quality. There is something off-putting and hard to swallow but undeniably compelling about it. So, too, it is with the “other” clergywomen and our work and ministry, their calling and community relationships, their voices and their perspectives.

I felt an odd urgency and hesitancy to delve into my faith during college when I felt like it was starting to root itself more deeply. Urgency because there were so many questions and I was hungry and thirsty for more. Hesitancy because I felt I didn’t quite have the space and security in the white, evangelical fellowships I found myself in most of the time.

Two or three times I shared vulnerably and was either looked at blankly, contradicted, or laughed at by the rest. And perhaps this isn’t new especially to many who’ve experienced that kind of disenfranchising from the groups of their childhood. But as a woman of color I’m always forced to the questions: is it because I’m Korean? I’m a woman? Those that are outside of this particular situation can never understand how those questions are always agonizingly a part of the equation.

No one makes this up. If I were white and male or even simply white I would never wonder if my race/ethnicity would make an impact on the dominant culture’s questions and doubts towards me. But these questions have been there from the beginning and stayed with me throughout seminary, my call process and interviewing at churches, and ministry. I can’t begin to count the number of times I had heard a church’s rejection and wondered if my ethnicity, gender, or age had more to do with it than the cop-out language of “God is leading us elsewhere.”

From the afterword: I let myself savor the stories in these pages like a glass of fine water turned into wine from that wedding at Cana. I celebrate, I give thanks, and I am deeply humbled by all the sacrifices and risks made by these writers. These clergywomen were vulnerable. They were transparent. They were genuine. And they were and are trustworthy. These are only glimpses into much more complicated histories and larger narratives. Yet, even these small windows allow us to see the possibilities for real connection and community, a little taste of the kingdom of God and how we experience that in the midst of struggle and surrender, in those places where reconciliation with God, neighbor, and self is rooted in embracing the other.

Being the other is not only a philosophical, social, political, or literary concept. It is a theological image. It speaks of a God of the margins, a God for the oppressed, a God who loves and pursues the stranger. And despite the history behind it and how it traditionally is a negative phenomenon, being the other does not have to be associated with colonial and imperialistic movements or a tool of oppressors or a burden of those who internalize what it means for the oppressed. The language of the other is redeemable but also an instrument for redemption. It speaks of the extreme and miraculous routes God forges to connect to us. It is the other that helps us to see God’s love for us even more. It is when we see and recognize the other in ourselves that we begin to fathom the depths of God’s love for us.

Join us in the struggle not only for voice and validation but for the sake of all lives that we’re created with dignity and love. 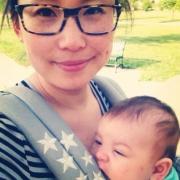 Rev. Mihee Kim-Kort is an ordained clergy now stay-at-home mom to twins and baby boy and staff for college ministry in Hoosier country. Zealous about God and church, books, writing, snow, goldfish crackers and waffles (i.e. remnants from the babies’ meals), and fresh air. She is the author of 2 books, Making Paper Cranes & Streams Run Uphill. She blogs at First Day Walking.

It was a joy to preach and serve communion on #WorldCommunionSunday!