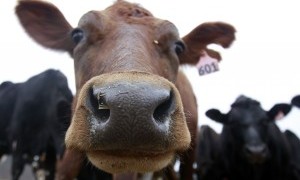 This is a repost from Shalereporter.com by Tara Zrinski and posted here with permission.

“Buy Fresh, Buy Local” has become the mantra of the organic farming movement in the Northeast, a growing agricultural trend that has sprouted in the Marcellus Shale region.

In addition to the farming there is an equally powerful industry boom that is buying up the land and erecting rigs to extract natural gas.

The Marcellus Shale region of Ohio, Pennsylvania, New York and West Virginia counts the highest concentration of organic farms, raising concerns that fracking will jeopardize produce and cause risks to farm animals. Farming and fracking, many believe, don’t mix.

Finding farmers to speak out against the shale gas industry has become almost as difficult as determining the chemicals used in the secret blends of fracking fluids.

Marilyn and Robert Hunt own a 70-acre organic farm in Wetzel County, W.V., where they raise goats, chickens, goats and cattle. When the landman from Chesapeake Energy approached the Hunts to lease their mineral rights, Marilyn did some research and turned down the offer. That did not stop Chesapeake from “stealing gas from both sides of our property,” she said.

In 2010, Chesapeake began drilling the Durig Well pad near the Hunts’ property along Route 89. Hunt said Chesapeake received a permit for land disposal near her property and dumped waste on her land that infected her family and her animals.

“The water got little white flecks in it, and we started to get sick,” said Hunt, “We lost a whole lot of baby goats that got gastrointestinal disorders from drinking the water.” In addition, some of the baby chicks her daughter was raising died of nervous system failure, and the ones that survived were deformed. Interestingly, though, the cattle that drink from the spring water on the highest point of her property were spared any adverse impact, leading Hunt to believe it was the water contaminated by the fracking waste that caused illnesses.

While the burden of proof may be on the industry to ensure the safety of their practice, the oil and gas industry simply relies on its No. 1 tagline: “There have been over a million wells hydraulically fractured in the history of the industry, and there is not one, not one, reported case of a freshwater aquifer having ever been contaminated from hydraulic fracturing.”

That statement, originally attributed to Rex W. Tillerson, the chief executive of ExxonMobil, at a 2010 congressional hearing on drilling, has taken on a life of its own, a readily repeatable factoid used by the industry to substantiate the claim that hydraulic fracturing has yet to be proved unsafe.

In January 2011, the first peer-reviewed report suggesting a link between fracking and illness in animals was published by Michelle Bamberger, an Ithaca, N.Y., veterinarian, and Robert Oswald, a professor of molecular medicine at Cornell’s College of Veterinary Medicine.

In their report, “Impacts of Gas Drilling on Human and Animal Health,” Bamberger and Oswald wrote, “Because animals are exposed continually to air, soil and groundwater and have more frequent reproductive cycles, animals can be used as sentinels to monitor impacts on human health.”

Within the 24 case studies of farms in six states exposed to oil and gas drilling, the authors present 27 pages of preliminary evidence that suggest that contamination of water, air and soil released in drilling activities impacts animal and public health.

One particular case study from the report echoes the Hunts’ own empirical evidence. Over a three-month period, 96 cattle grazing in three separate pastures were observed. Of the 60 cows that had access to a creek contaminated by the illegal dumping of wastewater, 21 died, 16 failed to reproduce and several had still-born calves. The remaining two pastures were at higher elevations and away from the creek, and of the 36 cows grazing there, none experienced adverse health effects or death.

The greatest fear is that exposed animals are making their way into meat and dairy products for human consumption. Animals that die are often ground and fed to chickens or pigs. Perhaps the most important conclusion of the study suggests that animals exhibiting these health problems could be indicative of a future emergence of public health problems.

Fracking fluids, highly guarded trade secrets, pose the greatest threat to farms because their dispersion in air, water and soil are difficult to trace back to a source of specific drilling operations.

Theodora Colborn, a professor emeritus at the University of Florida and president of the Endocrine Disruption Exchange, identified 632 chemicals used in natural gas production. She reported her findings in a 2011 article, “Natural Gas Operations from a Public Health Perspective,” which outlined the potential health risks of more than half of the proprietary fracking fluids.

Colburn wrote, “Many chemicals used during the fracturing and drilling stages of gas operations may have long-term health effects that are not immediately expressed.” While 75 percent of the chemicals affect the skin, eyes, respiratory and gastrointestinal systems, an alarming 50 percent affect the brain, nervous system, immune and cardiovascular systems, and 25 percent could cause cancer and mutations.

Organic farmers such as the Hunts are rallying against the shale gas industry, claiming to have reasonable proof that hydraulic fracturing is not as safe as the industry says.

How much proof is enough to keep the frack off the farm?

Hunt fears there is little more to do than to wait for the cluster cases of human illness and cancer to emerge before people demand legislation that would prohibit these chemicals from use in fracking.

[Read also:  Will Sandy’s Havoc Lead us to Care for the Earth?]

Tara is a freelance reporter and blogger for Shalereporter.com., highlighting the environmental, health and legal impacts of hydraulic fracturing in the Northeast. An adjunct instructor at Northampton Community College, Tara’s academic work and pursuits are focused on eco-feminism, ethics, philosophy and theology. Tara has been featured on AOL’s Patch.com as a weekly columnist, Moxie Momma, exploring social concerns and parenting strategies. Writing articles on lifestyle, entertainment and local travel, Tara has been a regular contributor to the Bethlehem, Hellertown and Upper Saucon Patch. As a research and investigative journalist, Tara’s work is regularly featured in the Elucidator Magazine. She resides in Bethlehem, PA with her three boys, four cats and supportive partner, Scott.